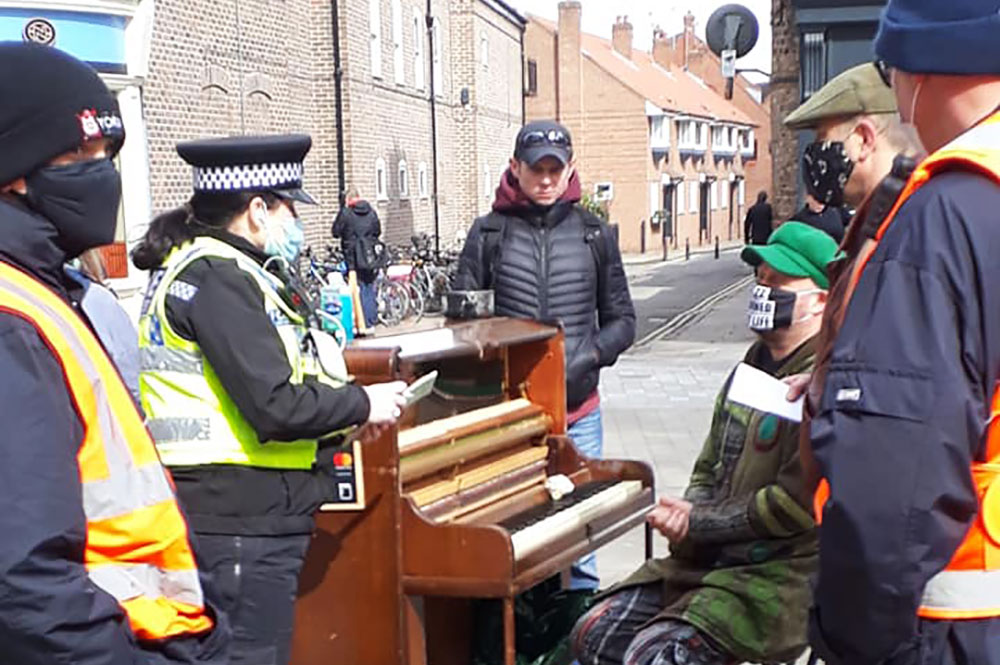 A York street entertainer has been hit with a £200 fine – because people allegedly gathered to listen to his music.

Popular piano player Alistair Lawrence was busking in King’s Square today (Saturday) when he was approached by police officers and Covid marshals.

Alistair told them he was just doing his job – busking – which he can’t do from home, and that wasn’t breaking the rules.

He said they told him he couldn’t busk until 17 May, according to the roadmap out of lockdown.

But Alistair had on him a copy of the legislation and argued it was still legal. He said the officers agreed with him in the end.

However, they said he was breaching the coronavirus regulations because he was ‘causing a crowd’.

At first “they issued me with an official warning and an order to stay away from the city centre for 48 hours. Then they changed their minds and scrapped that, but issued me with a fine.”

According to legal advice obtained by the Musicians’ Union, for busking is not illegal under the present laws.

But for it not to breach coronavirus regulations, it must meet two conditions: “Firstly, a busker would need to be able to prove they were undertaking ‘work’ and, secondly, would need to ensure that they had no audience.”

Whether Alistair had drawn a crowd is a moot point. York was fairly busy all day today.

And witnesses said the people who were gathered in King’s Square stayed even after Alistair wheeled his piano away.

Alistair’s treatment dismayed many. “It’s a joke! Do the police have it in for you?” wrote one of Facebook. “All you are doing is trying to earn a living and cheering people up at the same time. What’s wrong with that?”

Another wrote: “What a sad state of affairs – what happened to covid wardens who could have just helped keep people socially distanced? Three police and a £200 fine is ridiculous.”

Others urged him to appeal the fine.