A second van has been stolen from St Leonard’s Hospice in York.

Staff at the hospice said they were devastated to discover that the van had gone from the car park on Tadcaster Road – just three weeks after their Ford Transit van was taken.

It was one of the hospice’s larger box vans, registration YB12 OZS, similar to the one pictured above but with ‘Sponsor a Nurse’ livery.

A spokeswoman for the hospice said:

North Yorkshire Police are urging anyone with information to contact them on 101. 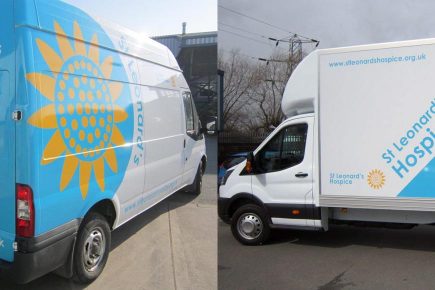 A force spokesman said: “All thefts of any description are obviously upsetting for the victims, but to target a hospice in this way is particularly despicable and saddening.

“We would urge anyone with information about these stolen vans to contact us immediately on 101 and quote reference number 1219105000.”

CCTV footage shows two men dressed in black at 11.17pm. Cameras then pick up the van heading west on the A64.

There is no news yet about the first van that was stolen. The hospice hasn’t had chance to replace that one yet – although a local company has kindly loaned them a replacement until they do.