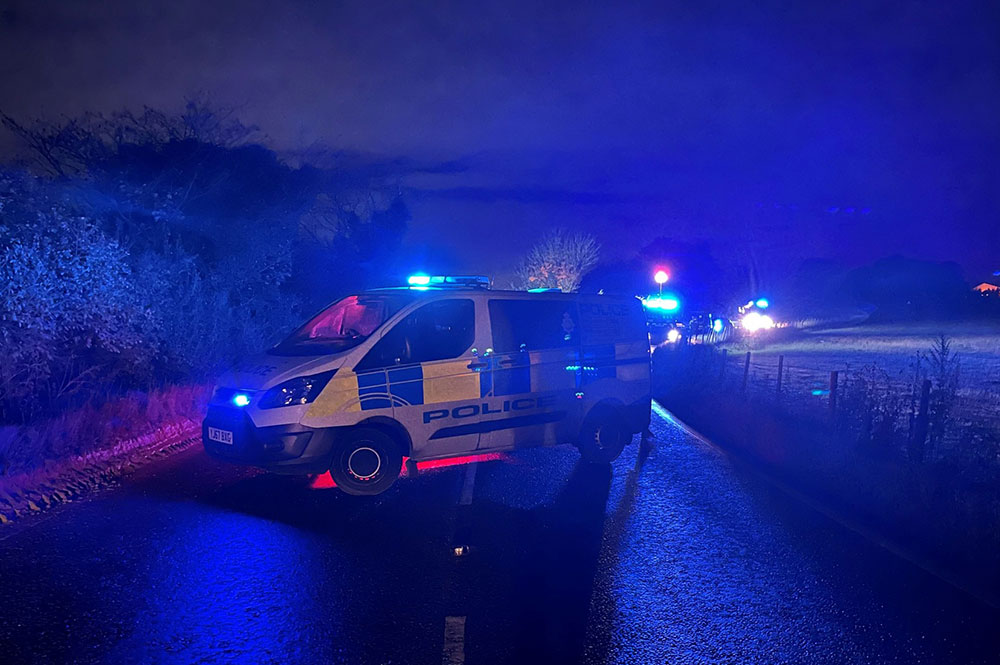 Police at the scene of the crash. Photograph: North Yorkshire Police

A drunk driver who was abusive and threatening to rescue workers after he crashed his car into a tree has escaped jail.

In October, Lee Alty failed to stop after nearly crashing into a stationary police car on the A645 between Hensall and Eggborough.

Then he drove too fast along the corner opposite the glass factory in Hensall and left the road – and his car came to rest in a tree “some distance from the ground”.

A North Yorkshire Police spokesperson said: “During his rescue and subsequent treatment Alty was extremely abusive towards the emergency service workers helping him including throwing mud at them and being abusive to medical professionals in York hospital.

“He was noted to be very drunk by officers but refused to cooperate with a requirement to give preliminary or evidential samples for analysis.”

Alty, from Lyndhurst Road, Birkdale, Merseyside, pleaded guilty at York Magistrates’ Court to numerous offences including failing to stop for a constable, driving without due care and attention, failing to provide a specimen for analysis when required to do so and being drunk and disorderly in a public place.

He received an eight week prison sentence suspended for 12 months, 200 hours unpaid work, a rehabilitation requirement, was disqualified from driving for 29 months and made to pay £203 in costs.

Lucky not to be hit

PS Campbell, the neighbourhood policing sergeant for the area, said: “I was lucky not to have been knocked down when this driver failed to comply with my direction to stop his vehicle after almost colliding with ours.

“I welcome the sentence handed down by York Magistrates’ Court this week and believe it reflects the serious nature of the offence.”

TC Harvey of the Tadcaster Roads Policing Group said “Drink driving is one of the main causes of fatal and serious injury collisions in the UK. In North Yorkshire we make it a priority to tackle this type of contemptible behaviour which could quite easily have led to an innocent road user being killed or seriously injured.

“It may appear that our roads are quieter when you visit the county and that you might get away with it if you chance it, but I am determined to do whatever I can to prevent this crime on my patch.”