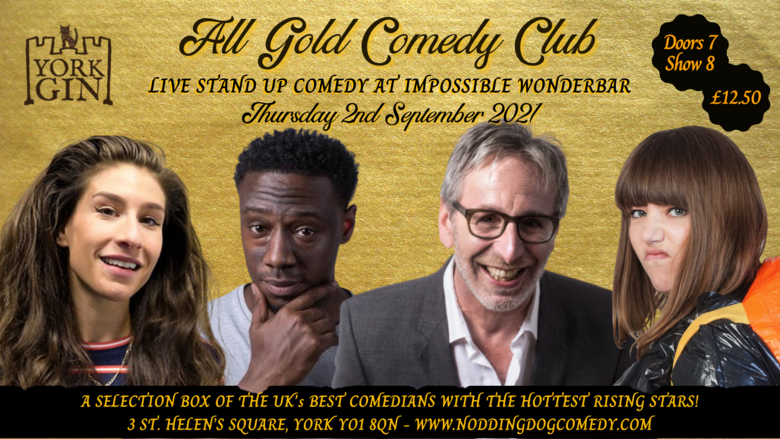 All Gold Comedy Club is located in the beautiful Impossible, York, former HQ of Terry’s Chocolate.

On the first Thursday of the month we present an assortment of the best comedians on the circuit and the hottest rising stars.

Join us in September!

Our resident MC LOUISE YOUNG is tipped for the absolute top in comedy and in huge demand. The Geordie comic has a laid back style, warmth and wonderfully crafted, razor sharp jokes. One of the very best on the circuit today, Louise was also nominated for the Leicester Mercury Comedian Of The Year 2020.

Ranked amongst the top ten stand-ups in Britain by The Independent, IAN STONE is one of the most talented topical acts and comperes in the country. Edgy and provocative, with an easy-going manner and self-depreciating style, Ian is at great ease bantering with an audience. He’s a member of the Comedy Store’s critically acclaimed ‘Cutting Edge’ team.

NATHAN CATON is one of the most exciting young comedians on the scene. Gigging since the tender age of 19, over the last decade he has established himself both as a circuit headliner, and a name on TV and radio.

Within his first few years on stage, he had picked up various accolades and coveted plaudits including the Chortle Student Comic of the Year award and Broadcast Hotshot and written and starred in a pilot for Paramount Comedy (now Comedy Central) entitled The Nathan Caton Show.

Since then Caton has gone from strength to strength, wowing audiences at comedy clubs up and down the UK, and on his numerous TV and radio appearances, with his delightfully charming blend of personal and political comedy.

KATIE PRITCHARD is an award-Winning Comedian, West End & TV Actor, Musician, Writer, and Artist. You can catch her rocking out on guitar in award-winning all-girl Rock’n’Roll band The Daisy Chains. She’s been on the tele box on Harry Hills Clubnite, created a silly little podcast with her producer Katharine Kerr – The Farce and the Spurios, as well as having marvellous fun being a guest on a few others!