A building which features a unique piece York theatrical history dating back nearly 200 years is under threat of demolition.

A notice has appeared on number 79 Fulford Road to announce that an application to knock it down has been submitted to City of York Council.

This has caused widespread dismay among residents who value York’s history – as the building incorporates a facade that was previously part of York Theatre Royal.

Designed by John Harper in 1834, the arcade was part of the theatre until it was remodelled in 1879.

It became part of the privately-owned residence which has, in more recent years, been a garage, a doctor’s surgery, and the Pipkins Nursery.

‘I am so shocked’

The notice announcing the intended demolition was spotted by Pam Jackson, who works at the York Priory Guest House opposite the threatened building. 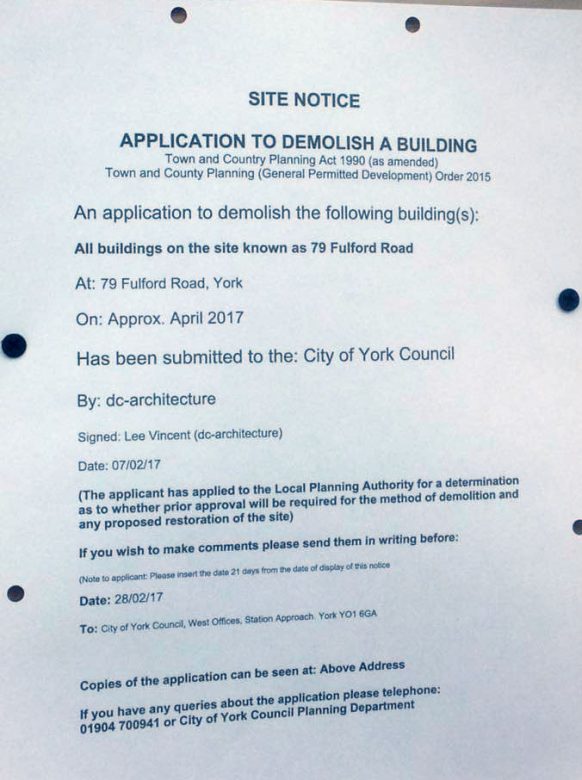 An application to demolish the following buildings:

All buildings on the site known as 79 Fulford Road

Has been submitted to City of York Council

Pam told YorkMix: “I am so shocked – I hope there’s a chance it can be saved.”

She posted about the plan on the York Past & Present Facebook group, and many others have registered their shock and dismay.

Among them is Dave Taylor, Green Party councillor for Fishergate ward and Lord Mayor of York.

He told the group: “This is terrible news and I shall certainly be objecting.”

A lot of history

According to York historian David Poole, when St Leonard’s Place was created in about 1834, a new entrance to York Theatre Royal was built and included the arcade by John Harper.

When this was replaced in about 1879 by the theatre exterior we see today, the old eight-arch arcade was put up in Fulford Road.

Lizzie Jackson, the owner of the York Priory on Fulford Road, explained a little of how the arcade came to be there. The Priory was built in 1876 by seed merchant Isaac Poad as a wedding present for his daughter.

When the alterations to the Theatre Royal were made, some of the redundant stonework went into the Priory garden, and the rest was incorporated into what we now know as 79 Fulford Road, directly across the road. Back then it was the coach house to the Priory.

Although it is not listed, the threatened building is on York’s Local List. This is the community-created register of buildings that are of importance to local communities because of their historic or architectural interest.

The historic facade hides a significant plot of land and other buildings behind it. Under the terms of the notice, these are all under threat of demolition.

What was the nursery is a shed-like structure. According to Cllr Taylor

Behind the nursery there are two fine coach house buildings which have been left to decay by the owner. These are worthy of saving too.

I’ve been prompting the council to contact the owner to rescue those properties for years. The owner has been reluctant to act… until now.

The fight to save this remarkable piece of York’s theatrical past has now begun. People can make their comments known by getting in touch with City of York Council’s planning department.

Is this the perfect replacement for York’s banned A-boards?